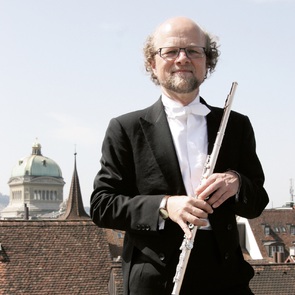 Christian Studler studied at the University for Music in Zurich. When he was 13 years old, his first radio broadcasts were transmitted and at the age of 18 he started to be invited for solo performances abroad. In the same year he won the national „Hans Ninck“ contest. First solo concerts with the large Swiss orchestras followed. At the age of 19 he continued his studies in Paris and Freiburg, Germany, with professor Aurèle Nicolet. Christian took master classes with M. Moyse and J. Galway in London. At the age of 22, he was one of the awardees at the international flute contest in Markneukirchen. He started to play as a principal flutist in the symphony orchestra in St. Gallen, Switzerland, and since 1979 he has been in the same position in the Symphony Orchestra in Bern. For two years he played in the Tonhalle orchestra in Zurich. For a long time he was a solo flutist of the Festival Orchestra of Lucerne. He played with conductors like Wolfgang Sawallisch, Vladimir Ashkenazy, Charles Dutoit and Kurt Sanderling. With only 24 years, Christian was already the youngest professor at the University for Music in Bern. As a soloist he worked with several conductors like Marcello Viotti, Okko Kamu, Gustav Kuhn, Peter Maag, Peter Gülke, Ivan Anguélov and Edmond de Stoutz. He regularly gives masterclasses in Europe and China. He is visiting professor at the “Jilin College of the Arts”.

In recent years he has increasingly turned to pedagogics and didactics.

You can communicate with Mr. Studler in English, French, German.