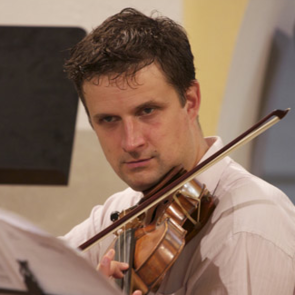 Violinist Attila Füzesséry studied at the Ferenc Liszt Academy of Music in Budapest and received his diploma in 1997. For three years he was a member of the Hungarian National Philharmonic Orchestra, for two years he played in the Hungarian State Opera Orchestra. Between 2000 and 2007 he was concertmaster of the Pest County Symphony Orchestra. Presently he is violinist at the Dohnányi Orchestra Budafok, and also active as a soloist and chamber musician. He is a member of the HÍD ("Bridge") Chamber Ensemble, the Sárospatak String Quartet and the Violinetta Duo. Since 2004, he teaches violin at the international Crescendo Summer Institute of the Arts in Sárospatak, Hungary.

He is a member of the Hungarian Pedagogues Association (Magyar Pedagógiai Társaság) and the Hungarian Classical Music Society (Magyar Zeneművészeti Társaság). As a member of the Violinetta Duo, he received the award of the Artisjus Music Foundation for excellence in performance and propagation of Hungarian contemporary compositions in 2009. Since 2010 he teaches violin and  chamber music at the Kroó György Music School Budapest, where he leads and conducts the Kroó György Symphony Orchestra, too.

You can communicate with Mr. Füzesséry in German and English.