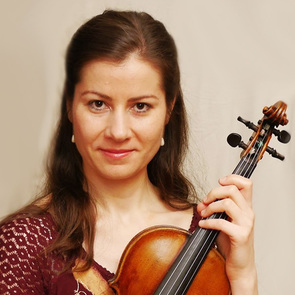 Katalin Farkas obtained her masters degree with honors in performance violin and teaching at the Franz Liszt Academy of Music in Budapest, in the class of Eszter Perényi in 2003. From 2003 to 2005, she attended postgraduate studies at the University of Music and Performing Arts Graz, in the class of Sylvia-Elisabeth Viertel. In 2012, she got her DLA degree with the dictinction summa cum laude also at the Franz Liszt Academy of Music in Budapest. The tittle of her DLA dissertation is Alfred Schnittke’s Works for Violin. During her studies, she attended numerous master classes – for example Dmitry Sitkovetski, Vesselin Paraschkevov, Dénes Kovács, Stephan Ruha, Vilmos Szabadi, Dénes Zsigmondy, Eszter Perényi, János Rolla, Barnabás Kelemen – and participated at music competitions with success: she got special prizes in 2000 at the Jenő Hubay National Violin Competition and in 1999 at the VIII. Károly Flesch International Violin Competitions and 2nd prize and special prize in 1998 at the National Zathureczky Violin Competition.

Since 2008, she has been teaching at the Béla Bartók Institute of Music at the University of Miskolc and since 2020 she is also the head of Strings Department. She was the member of the New Hungarian Chamber Orchestra from 2012-15 and played in several other orchestras, for example at Hungarians Radio Symphonic Orchestra, Franz Liszt Chamber Orchestra, the Orchestra at Tyrolean Festspiele Erl and Erdődy Chamber Orchestra. She organizes violin master courses at the University of Miskolc and gives concerts regularly with Hungarian noted musicians mainly in sonata, duo and trio forms. Her regular partners are Tamás Kéry and Ferenc János Szabó pianists, Anna Scholz cellist and her husband, Csaba Fervágner contrabassist. In 2015, she got the prize of the Hungarian Academy of Science, Miskolc Regional Committee.

You can communicate with Ms. Farkas in English and a little in German.