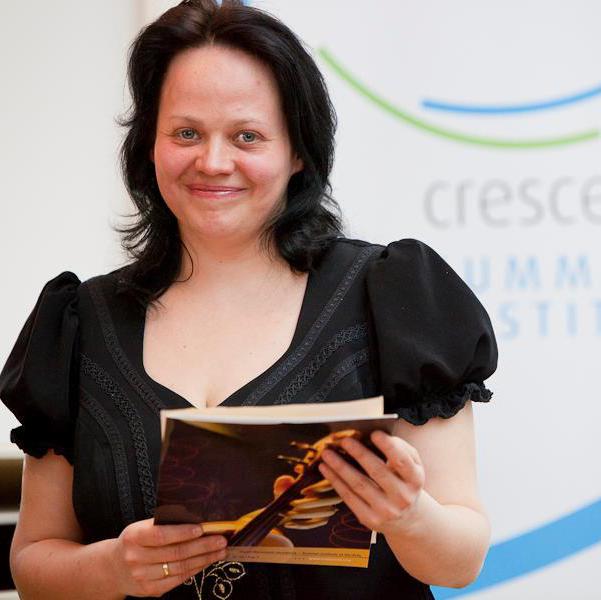 Violist Eszter Dudás started her studies at the State Music School of Sárospatak, after which she was admitted to the Zoltán Kodály Conservatory of Debrecen, and finally earned her artist diploma at the Franz Liszt Music Academy in 1999 as a student of László Bársony.

She taught viola and chamber music at the Vác Conservatory of Music. Currently she teaches violin, viola and chamber music at the Kroó György Music School where she is also the artistic director of the symphony orchestra. Her students are winners of numerous prizes in solo- and chamber music competitions in Budapest and Hungary. She is a member of the Violinetta Duo. She was viola section leader of the Pest County Symphonic Orchestra between 2002 and 2009. When she was a child, the KinderRadio of Berlin made a recording with her. Later she was member of the Junge Österreichische Philharmonie. In 1998 she received a scholarship from the Wiener Musikseminar for the masterclass of Siegfried Führlinger at the Hochschule für Musik, Vienna.

She has performed with the leading symphonic orchestras of Hungary on many European stages, was part of numerous CD recordings, and has been invited to Hungarian and international festivals. She is a member of the Hungarian Pedagogues Association (Magyar Pedagógiai Társaság) and the Hungarian Classical Music Society (Magyar Zeneművészeti Társaság). In 2009 she received the award of the Artisjus Music Foundation as a member of the Violinetta Duo for excellence in performance and propagation of Hungarian contemporary music.

She often takes part on international educational trips. In 2010 and 2011 she won scholarship to the Sibelius Academy and the East-Helsinki Musical Institute in Helsinki, Finland. She annualy participates in conferences and artistic workshops where she enhances her professional knowledge. In 2016 she participated and gave a lecture at the 1st Crescendo Teachers Conference in Birmingham, UK.

As the artistic leader of Crescendo Hungary and director of the Crescendo Festival she cooperated with several international cultural centres in Budapest, such as the British Council, Goethe Institute, Austrian Cultural Forum, Czech Centre, Slovak Cultural Institute, Finnish Embassy, Portugal Cultural Office. As president of the Song For the Nations Cultural Foundation she has won several grants and managed artistic events in the past 14 years with partners from Hungarian state organizations, Erasmus+ and the Visegrad countries.

In 2013 she received a special prize from the Municipality of Sárospatak, mentioning Crescendo Summer Institute’s activity as the continued work of Comenius, Saint Elizabeth and the Rákóczis. The prize itself was a Saint Elizabeth plaque made by Antal Borsi and a special edition of Comenius' Orbis pictus. Also in 2013 she received the Bonis Bona - For the Nation’s Talents prize from the Ministry of Human Resources for her work with talented youth. In 2015 she received the Sajó Sándor Prize from the mayor of the Budapest 10th district for her work as an artist teacher. In 2015 she was invited to take part in the project on master-pedagogue and research-educator degrees in the teacher qualification system on behalf of the Eötvös Loránd University. She earned her master-pedagogue degree in 2016. She became Head of the Chamber Music Department at the Kroó György Music School in February, 2017. She is leader of the Kroó György Symphonic Orchestra, the Kroó Baroque Ensemble and the Kroó Youth Orchestra. Within the international partnerships of the Institute these orchestras performed in Vienna (2013), Madrid (2014), Cracow (2016) and Prague (2017). Her musical essays and professional reports had been issued in various cultural and educational forums, such as Fidelio, Parlando, Gramophon, prae.hu, Tanker Info (Budapest 10th and 17th district educational news), and she is regularly interviewed in the Hungarian media: m1, m5 (state channels), HírTV, Radio Bartók, Radio Kossuth (state channels), Zemplén Television, Radio Szent István.

You can communicate with Ms. Dudás in English.