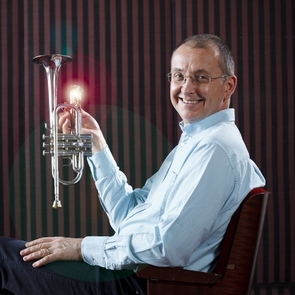 Julian has been a member of the Chamber Orchestra of Europe since its creation in 1981, playing with many celebrated musicians such as Bernard Haitink, Claudio Abbado, Nikolaus Harnoncourt, Andras Schiff, Placido Domingo, Luciano Pavarotti, Yannick Nézet-Séguin and Leonidas Kavakos.

He has eaten falafel in just about every city the orchestra has visited, and enjoys the challenge of finding the best coffee. He offsets some of this indulgence by exploring running routes based around the hotels in which the orchestra stays.

He studied at the Guildhall School of Music and Drama in London with Horace Barker, Ray Simmons and John Miller.

Julian is director of music at his home church, the Salvation Army at Alton in the UK, and particularly enjoys inspiring and helping people to discover their own expression in making music.

He is Head of Brass at the University of Southampton and at Peter Symonds College in Winchester, where he also conducts the orchestra. He also teaches at Winchester College and the Pilgrims School and enjoys coaching the brass section of the Hampshire County Youth Orchestra. He has participated in projects in Cluj, Romania for Oratorium, in Hungary for the Crescendo Summer Institute, in the USA and UK for Masterworks and in Catalunya for JONC (Jove Orquestra Nacional de Catalunya.)

You can communicate with Mr. Poore in English and German.