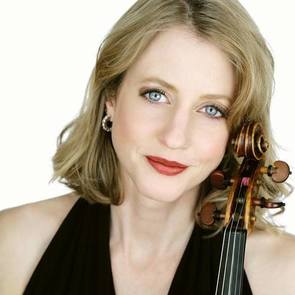 Heather Martin Bixler is a classical violinist and Irish fiddler whose playing has taken her all over North America, Europe, and Asia. A graduate of Indiana University, (B.M.), The Juilliard School, (M.M.), and University of Memphis, (Doctorate of Musical Arts degree), for over twenty-five years she has performed in many major concert halls including Musikverein in Vienna, Carnegie Hall in New York, as well as concert halls in Tokyo, Barcelona, and Mexico City.

In 1992 Mrs. Bixler won a first violin position in the Orquestra Ciutat de Barcelona in Spain and since then has held concertmaster positions with South Dakota Symphony and Orquesta Sinfonica de la Mineria in Mexico City, and has worked as a substitute violinist with New York Orchestras including The New York Philharmonic, New York City Ballet, and American Symphony. In addition, Heather has appeared on such singers’ videos as Maria Carey, Shania Twain, Jewel, and Donna Summer, including an appearance on the Rosie O'Donnell Show with the Trans-Siberian Orchestra.

As an Irish musician, Heather won the third medal for the senior slow airs at the All-Ireland fleadh in Donegal, Ireland in 2006.  Currently she is in demand as a performer and teacher of Irish music at various festivals throughout the United States, Canada, and Ireland. Heather performs regularly with musicians such as Ciaran Sheehan, Gabriel Donohue, Donie Carroll and Jimmy Crowley, as well as being the guest on several prominent Irish musicians’ solo recordings.

Heather has recorded and performed with GRAMMY award winner Arturo O’Farrill and his Afro-Cuban Jazz Orchestra with which she soloed at Symphony Space and Museo del Barrio in New York and recorded on their most recently release CD. As an arranger, Heather created a combination of Irish music accompanied by symphony orchestra which she performed as guest soloist with Garden State Philharmonic in Toms River, NJ, Chelsea Symphony in New York City, and South Dakota Symphony in Sioux Falls, SD. The Irish Concerto imitates the form of Vivaldi’s “Spring” from the Four Seasons with three movements and a classical symphonic accompaniment orchestrated by David Bixler.

Heather’s discography includes Auction Project and Slink on the Zoho record label and Bixxlixx Music, respectively, music that merges traditional Irish tunes with jazz. The first recording of this group has, upon its recent release, been praised by critics for its innovation and excellence in its emotional content and technical display.  Auction Project was awarded four stars in Downbeat Magazine in January, 2011, and was chosen as Best Fusion CD of 2010 in the Irish Echo.

Currently Heather is finishing a Bachelor of Science degree in Neuroscience at Columbia University in the City of New York with an anticipated graduation date of May 2021. She is planning to continue research into the influence of music on the epileptic brain and the use of elements of music in neuronal signaling. Heather lives in New York City with her jazz saxophonist husband, David Bixler.

You can communicate with Ms. Bixler in English, Spanish and French.