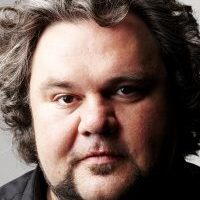 Uwe Schenker-Primus was born in Rosenheim. He gained his first musical experience in the Windsbach Boys Choir.

He completed his vocal studies with Prof. Monika Bürgener in 2006 at the University of Music with an opera and concert diploma.

His oratorio repertoire ranges from Monteverdi via Bach, Mendelssohn, Brahms to contemporary music (such as Penderecki's Lukaspassion or Adams' "Wound Dresser"). World premieres as well as opera and operetta concerts play an important role alongside theater life.

As a guest he appeared among others at the "Rheingaufestival" in Wiesbaden, at the "Mozart Festival" in Würzburg, at the "Open-Air Tower Baur" in Ingolstadt, at the "Nymphenburg Summer" in Munich, at the "Kissinger Summer" or "Voice Festival" in Lörrach.

In the song section, he concentrates mainly on the "baritone songs" of Pfitzner and Korngold. In 2010 the complete recording of the songs of the two composers were published at Naxos with the collaboration of pianist Klaus Simon.

From 2005-2009 he was a permanent member of the ensemble at the Mainfrankentheater Würzburg. He sang among others as Valentin, Guglielmo, father in Hansel and Gretel, Wolfram in Tannhäuser and Papageno.

Guest contracts have taken him to the comic and the German opera in Berlin (Falke - Le Bailly), the opera (Ottokar and Camina Burana) and the Musical Comedy in Leipzig (Tsar), Darmstadt State Theater (Danilo), City Theater Bremerhaven (Bartolo, Caspar) and several times to the Mainfrankentheater Würzburg (Danilo, Kurwenal, Falke). In 2015 for the first time at Schloss Esterhazy in Eisenstadt with the children's opera The Snow Queen. In 2016 resumption of the opera as well as for the first time the Dulcamara in the quarry St. Margareten.

You can communicate with Mr. Schenker-Primus in English and German.