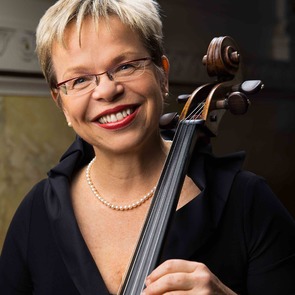 Anne Martindale Williams has enjoyed a successful career as principal cellist of the Pittsburgh Symphony Orchestra since 1979. Throughout her tenure with the orchestra, she has often been featured as soloist both in Pittsburgh and on tour in New York at Carnegie Hall and Avery Fisher Hall.

She has also collaborated with guest artists such as Yehudi Menuhin, André Previn, the Emerson Quartet, Lynn Harrell, Joshua Bell, Gil Shaham and Pinchas Zukerman in numerous chamber music performances. She made her London debut performing Dvořák’s Cello Concerto with the Royal Philharmonic, Andre Previn conducting. Her solo in The Swan on the Pittsburgh Symphony’s recording of Carnival of the Animals by Saint-Saëns was described by Grammophon critic Edward Greenfield as “…the most memorable performance of all.”

Mrs. Williams divides her time between the orchestra, teaching at Carnegie Mellon University in Pittsburgh, and solo and chamber music performances. She has given master classes at many universities and festivals throughout the country, including the Curtis Institute of Music, Manhattan School of Music, the New World Symphony in Miami, and Aspen. She also has performed at many of America’s prestigious summer music festivals including Aspen, Caramoor, Skaneateles, Maui, Rockport Festivals in Massachusetts and Maine, Grand Teton, Strings Festival, Orcas Island, and Mainly Mozart in San Diego. For many years she has enjoyed performing with her Piano Trio,which includes her good friends Andrés Cárdenes and David Deveau.

Williams is a graduate of the Curtis Institute of Music where she studied with Orlando Cole. Her Tecchler cello was made in Rome in 1701.

You can communicate with Mrs. Williams in English.