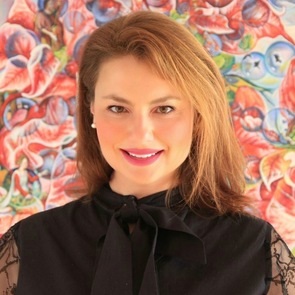 ADRIANA MAGDOVSKI was born in Maribor, Slovenia to a Polish mother and a Macedonian father. She took her first piano lessons at the age of four and then began studies with Prof. Milena Sever at the National Music Conservatory in Maribor. During this time she caught the attention of the Slovene audiences by winning the 21. National Competition for Young Musicians with a perfect score of one hundred points. After this success she performed in concert halls throughout Slovenia and recorded for national television and radio broadcasts. She debuted with the Slovene Philharmonic Orchestra, Slovene RTV Symphony, and the Maribor Philharmonic Orchestra. (Gallus Hall of the Cankarjev Dom-Ljubljana; Union Hall, Kazinska Hall of the Slovene National Theatre and the Big Hall of the Slovene National Theatre-Maribor).

At fifteen years of age she was accepted at the University for Music and Performing Arts in Graz, Austria where she studied in the class of Prof. Doris Wolf-Blumauer. After an extended study stint in London with the world renowned Norma Fisher, she finished her formal studies at the Staatliche Hochschule fuer Musik und darstellende Kunst in Stuttgart, Germany with Prof. Oleg Maisenberg and Prof. Wolgang Bloser. Invaluable insights were gained from Irena Grafenauer, internationally celebrated flutist, who mentored Ms. Magdovski’s chamber-music work in her class at the Mozarteum in Salzburg. This was the fruit of a collaboration with Irena Grafenauer at the International Chamber Music Festival Music September in Maribor.

Adriana Magdovski is the recipient of the Martha Debelli Scholarship awarded by the University for Music and Performing Arts in Graz, Austria, and the Soroptimist International Scholarship (Amsterdam); a prizewinner of the Gina Bachauer International Junior Piano Competition in Salt Lake City (USA); and the winner of the Gallus Prize awarded by the Slovene National TV and Radio and the Slovene Philharmonic Society In Ljubljana, Slovenia).

Ms. Magdovski enjoys a very special relationship with the legendary pianist and pedagogue Prof. Norma Fisher. In 2016 and 2017 Ms. Magdovski has been Prof. Norma Fisher’s Assistant at the Royal College of Music in London, the London Masterclasses at the Royal Northern College of Music in Manchester and the International Piano Competition ˝Vladimir Horowitz˝ in Kyiv, Ukraine.